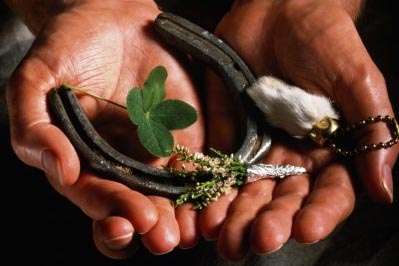 Everything started with a headline: “Most cancers are caused by bad luck – not bad judgement, says study” (Independent), and another: “Most Cancers Caused Mainly By ‘Bad Luck’ Mutations: John Hopkins Study” (International Business Time),… while the real title of the publication everybody talked about is: “Variation in cancer risk among tissues can be explained by the number of stem cell divisions”.

I was personally upset when I read the newspapers talking about this publication from the John Hopkins team. I felt as if the journalists were minimizing these diseases: two-thirds of the cancers are due to bad luck, so what can we do? Nothing, it is just fate! So I decided to clarify some fundamental truths.

I know the John Hopkins team did not want to minimize cancer and its prevention. What the publication says is that two-thirds of the types of cancer studied were mainly the consequences of endogenous mutations happening during the normal cell life cycle. By types the authors indicate the specific tissues where cancer occurred. What does this mean? It means that in some tissues with a higher rate of cell division, more DNA mutations that could result in a tumour occur (e.g. when the cells divide, the replication machinery in charge of copying DNA may fail and include unwanted mutations in the new cells, so more cell division means more chance of suffering such mutation). The authors then compare this replication factor with environmental and heredity factors and conclude that for two-thirds of the types of cancer studied in this publication (but I repeat, NOT all the types) the replication factor was clearly predominant.

Having explained this, I agree with the paper and the authors’ conclusion that, on many occasions, cancer is genuinely a question of bad luck, and it seems that up to two-thirds of the types of cancer studied in this report are related to bad luck.

However, there is something that has not been highlighted by the press when they reported the conclusions of this paper. Statistics is a tricky business, and they have been tricked. The point is that two-thirds of the types of cancer studied is not the same as two-thirds of cancer cases or even two-thirds of deaths by cancer. The following table, published by the National Cancer Institute, classifies type of cancers with the estimated number of deaths and the estimated new cases in 2014: 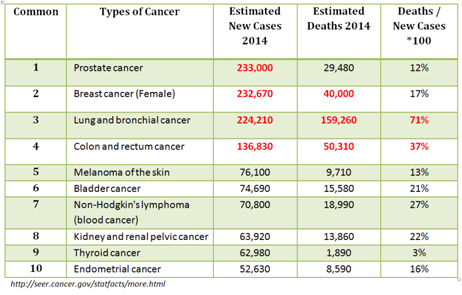 From this table we can clearly conclude several facts:
• The four most common types of cancer diagnosed in 2014 in US were prostate, breast (female), lung, and colorectal.
• The three most lethal types of cancer in 2014 in US were lung, colorectal and breast. They cause more than the double of deaths of the other cancer types listed in the table.
• The factor on the right combines the number of deaths with the new cases. I consider the cancers with high factors, such as lung and colorectal, to be particularly dangerous.

Now let’s compare these data with the figures in the publication. Prostate and breast cancer are not represented in the study due to lack of data. However, the influence of hereditary factors in breast cancer is well known. Lung and colorectal cancers appear to be mainly due to environmental factor, according to the John Hopkins publication. We can therefore conclude that, although two-thirds of the types of cancer are due to bad luck, the most common, lethal and dangerous are, in fact, mainly related to environmental or heredity factors. I would have greatly appreciated it if the newspapers publishing articles on this subject had mentioned this point.

To conclude, the John Hopkins team did a great job in correlating the role of endogenous mutations and replication rates with certain types of cancer. However, everyone should bear in mind that we can prevent or control some cancers strongly related to the environment or heredity, including the ones that cause the greatest harm, by adopting healthier behaviour.

Anyone can be unlucky, but everyone can also have a big influence on their own well-being.