One of our clients approached us with a request to optimize the reduction of an halogenated nitroheterocycle. The starting process used Ni Raney as the catalyst to yield 60% of the product along with several main impurities.

We tackled the problem by applying the DoE principles in three stages. The first stage involved obtaining more information about the starting material: solubility in different solvents, stability, and impurities. The experiments in this first stage were mainly aimed at finding possible solvents for the reaction. We found out that the starting material was not compatible with nucleophilic solvents, while the solubility in other solvents commonly used in hydrogenation was also an issue.

In a second stage, we concentrated our efforts in the reaction. Since some of the impurities arose from a competitive dehalogenation reaction during the hydrogenation of the nitro group, we performed a screening of catalysts. Fifteen different catalysts from three different industrial suppliers were evaluated under standard conditions. We discovered that a commercial platinum-based catalyst provided a 98.8% conversion in just 6 h (vs. 21 h in the original process) with a very low impurity profile.

According to DoE, the next step was the optimization. In this third stage, we designed a two-level factorial with three variables: catalyst load, temperature and pressure. A center point was included in the design, and nine experiments were run. The results were analyzed using Design-Ease software. The most significant factor in the reaction was the catalyst loading. The pressure, temperature and combinations of these factors were not significant, but included in the analysis to avoid the simplest case of just one significant factor in the model. The program found the model to be consistent. 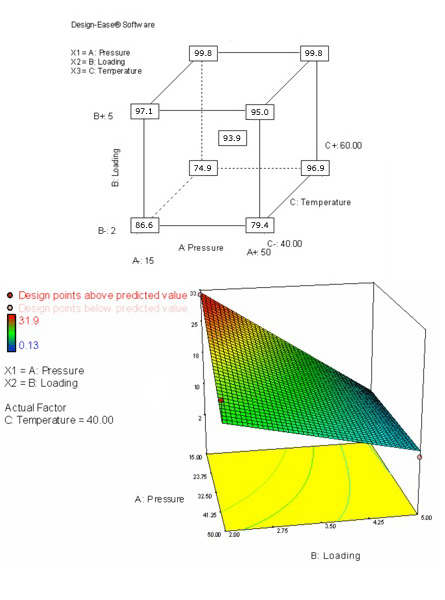 The combination of pressure and loading is shown as a secondary factor, with much less influence than the catalyst loading. The influence of the pressure was larger at lower loadings, with no relevance at high loadings. The temperature was the third factor. At low loadings, its effect was higher at high pressures, but with a small effect. Although some of this information was obvious from the beginning, the software allowed to predict that the catalyst loading could be reduced if the pressure, temperature, and reaction time were increased. If lower loadings were required for scale up, these options would remain feasible as the product did not decompose under those reaction conditions.