A Nobel Prize for CRISPR Technology 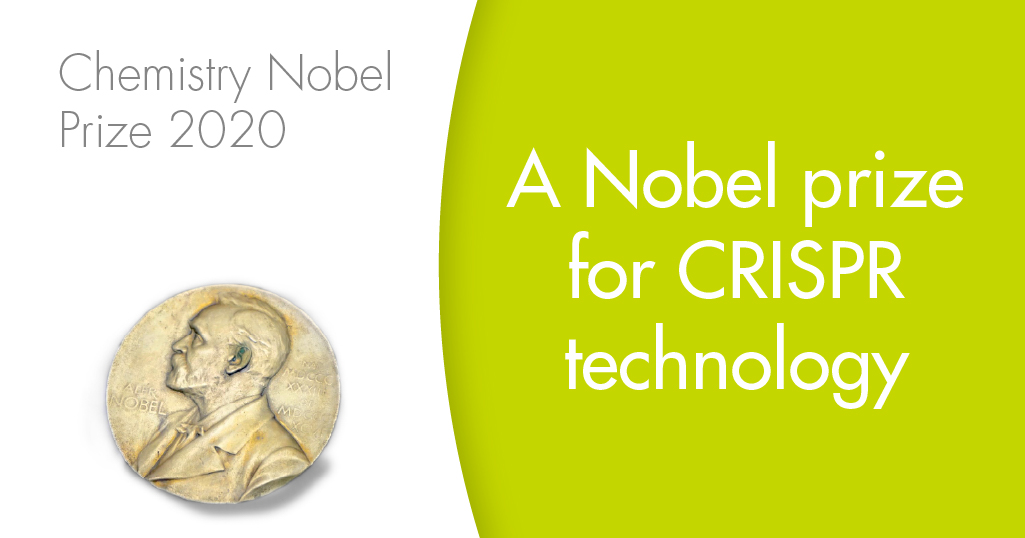 The 2020 Nobel Prize in Chemistry has been awarded to Emmanuelle Charpentier and Jennifer A. Doudna for “the development of a method for genome editing”. They not only played a key role in understanding the adaptive immune system of bacteria but then took it further by transforming it into a precise tool for genome editing.

Dr Charpentier is a French microbiologist and currently Director of the Max Planck Unit for the Science of Pathogens, and Dr Doudna is an American biochemist serving both as Professor at the University of California, Berkeley, and Investigator at the Howard Hughes Medical Institute. They began their successful collaboration back in 2011, as a natural match to their research interests and expertise.

This award is remarkable not only because Charpentier and Doudna are the sixth and seventh women to win the prize in Chemistry AND the first women to jointly win a science Nobel Prize, but because CRISPR technology has been recognized less than 10 years from its first demonstration. This should tell you a lot about the significance of CRISPR.

The story starts as an investigation on how bacteria fight viral infections; in particular, Charpentier was working on the immune system of Streptococcus pyogenes. This species of bacteria causes a wide range of human diseases and poses a serious threat to human health, hence the interest on studying its defense mechanisms. Charpentier found an odd series of repeating segments in this bacteria DNA, intercalated by other non-repeating fragments.

Other researchers working in this field had been reporting similar repeating sequences in other microbes throughout the 80s and 90s. They finally received a name in 2000 by Spanish microbiologist Francisco Mójica: Clustered Regularly Interspaced Short Palindromic Repeats (CRISPR). During his investigations, he realized that between these repeats were bits of genetic material derived from viruses. At this point, no one was sure of their function, although he was convinced that they must be involved in the bacteria immune system because, why would bacteria keep such a record of past viral infections otherwise?

Therefore, once a bacteria survives a virus infection, it integrates the viral DNA in its genome, creating thus a registry of all past infections. This DNA is used not only to protect the bacteria from new infections, but it is passed on to new generations, by which new bacteria are automatically “vaccinated” against those viruses. The question was how these CRISPR segments led to viral immunity in bacteria. A second player was then discovered, a series of proteins associated to CRISPR (Cas), which are able to cleave DNA. These CRISPR/Cas complexes are the enforcing arm in this immune system, whereby CRISPR signals the position and Cas cuts out the foreign DNA.

Charpentier found the final piece of the puzzle, uncovering the fundamental mechanism of the adaptive immune system of bacteria, that is, how the CRISPR/Cas complex works to detect and remove viral DNA. Once the virus DNA is inserted into the bacteria CRISPR segment, the cell makes a little RNA copy of it (tracrRNA), which associates with a Cas protein becoming a “sentinel” that searches for the matching DNA sequence (that is, it detects the presence of viral DNA). If found, Cas will cut out very precisely that fragment of viral DNA (Figure 1). 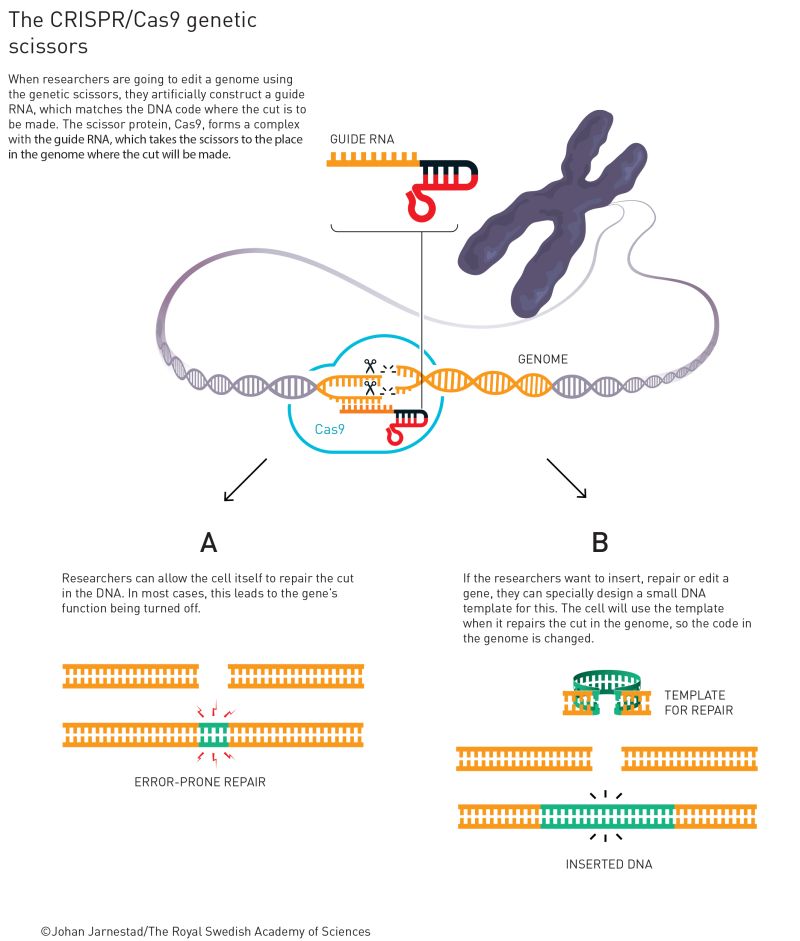 This work was published in Nature in 2011, the same year that Charpentier started to collaborate with Doudna, a renowned RNA expert. They wondered whether it would be possible to recreate these “genetic scissors” in a test tube. They did so by simplifying the molecular components to make it easier to use; in this case using Cas9, the simplest of all Cas proteins. They went further and realized that they could program this tool to potentially act at any position on any genome. Together they transformed the CRISPR immune system into a genome editing tool, whose proof-of-concept was first reported in 2012 in Science.

So, what happens once you have made these very precise cuts in the DNA? Well, cells are able to detect damaged DNA and have natural mechanisms to repair it, either by pasting the ends of the broken DNA (which usually deactivates that gene) or by integrating a new piece of DNA. For example, you could set a CRISPR system to introduce breaks before and after a mutation, and then trigger the cells to repair that mutations by providing them a DNA template of the correct sequence (Figure 2). Now, you have fixed a mutation in DNA. 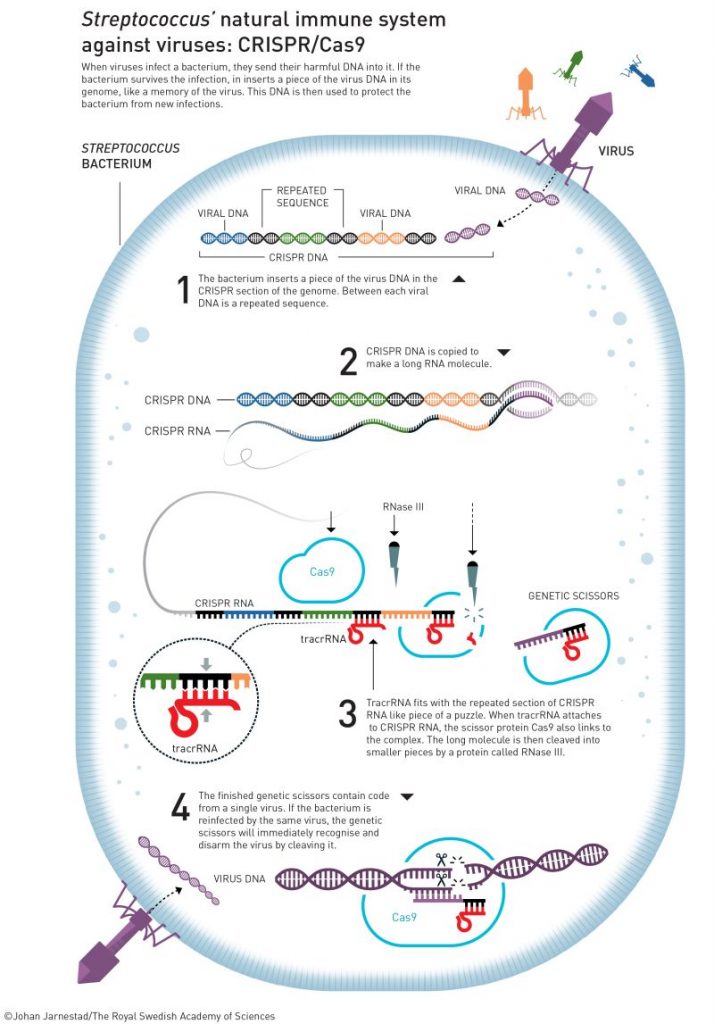 Just eight years after the first paper demonstrating the potential of the CRISPR/Cas9 complex, the technology is being applied in laboratories worldwide. Its simplicity and precision surpass those of all previous technologies.

CRISPR has applications in every field of biology, from fundamental questions about life to direct application in genetics. Researchers are now able to change the DNA of animals, plants and microorganisms with extremely high precision. The possibilities are therefore endless, from fighting genetic disorders to creating more resilient crops to feed the increasing world population.

As you can imagine, CRISPR is also one of the most controversial scientific developments in recent times. Genetic manipulations can be inherited, creating a black hole of ethical and safety concerns. The promise of therapeutic applications is somewhat muddled by the potential use of this technology for the capricious “design of humans”, as shown in 2018 by the questionable experiments of Dr He on human embryos. The enormous power of this genetic tool has implications for all of us, and the path ahead needs to be paved with caution, dialog, and ethics policies.

At GalChimia, we are always inspired by the ingenuity of scientists and their stories. This prize provides the much needed visibilization of women in STEM, honoring two leading women in active research, who have already become role models and an example of successful collaboration.