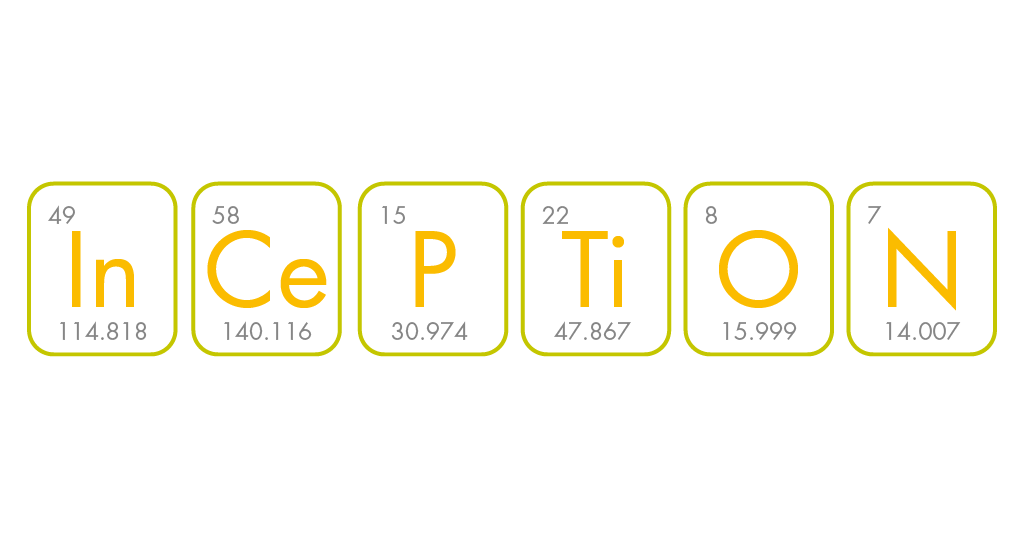 Because of the International Year of the Periodic Table, we have talked a lot about the periodic table, its history, and different shapes. Maybe it is time we talk about the chemical elements that fill it. Each element has a distinct number of protons in the nucleus, while isotopes present different numbers of neutrons. Have you ever wondered why we have so many (or so few) elements? Why some are abundant and other scarce? Where do they come from? How and when were they created?

“The nitrogen in our DNA, the calcium in our teeth, the iron in our blood, the carbon in our apple pies were made in the interiors of collapsing stars. We are made of star-stuff.”

Believe it or not, this is not just a whimsical thought! We are literally made of stuff generated at the heart of stars. Moreover, everything in the Universe was created in previous generations of stars 4.5 billion years ago and then released by stellar explosions.

In the first few minutes after the Big Bang, a series of nuclear reactions filled the Universe with hydrogen and helium (and a little bit of lithium). Further nucleogenesis was not possible because of the rapid cooling of the Universe. Stars then formed by self-gravitation of molecular clouds. As the clouds continued to collapse on themselves due to gravity, the material began to heat up.  Eventually, the center of the clouds reached a temperature high enough for hydrogen atoms to overcome electronic repulsion, after which they started to fuse together through a process called quantum tunneling. The energy released by this fusion provided the opposing force to gravity, stabilizing the stars against indefinite collapse.

Fusion is a type of nuclear reaction where two nuclei combine to form the nucleus of a new chemical element. Nuclear fusion converts hydrogen into helium in all stars; in stars smaller than the Sun, this is the only reaction that takes place.

The large gravitational field at the core of a star creates an environment of high density and temperature. At temperatures of 15 million K, the hydrogen and helium gases become plasma. That is, the electrons separate from the nuclei to give a mixture of positively charged ions and electrons. Under these conditions, protons (1H) react with other protons producing deuterium (2H) and positrons (image on the left below). The deuterium nuclei can then react to form a helium nucleus (4He), or with other protons to make a different helium isotope (3He). Two of these 3He nuclei can fuse to make a rather unstable beryllium nucleus (6Be) that finally breaks apart to give 4He and two protons (1H). Note that energy is released at each step. 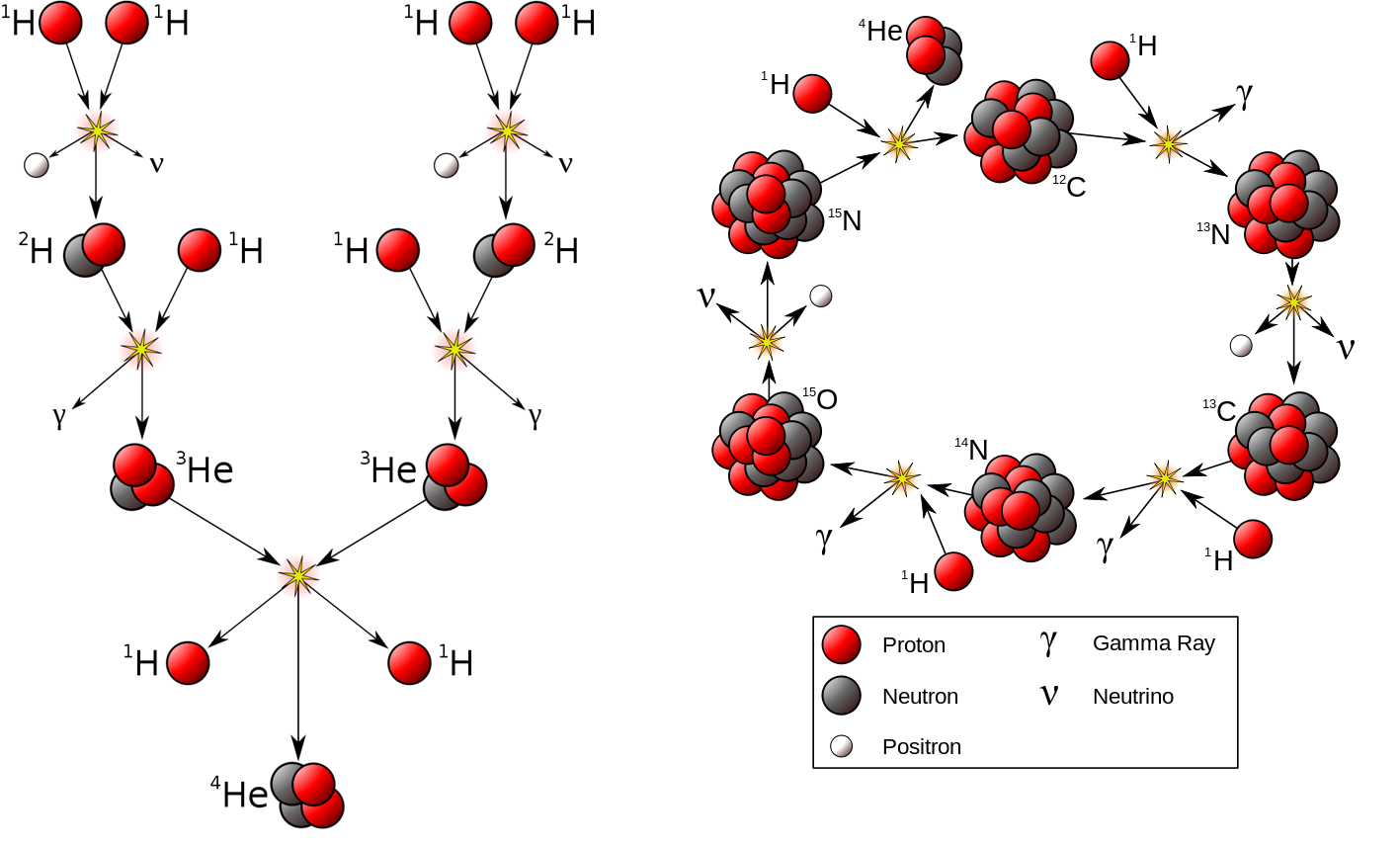 As fusion proceeds, the core of the star condenses and heats up, even more, reaching temperatures so high that the helium produced is readily converted into carbon or oxygen by further fusion reactions (3 4He → 12C; 12C + 4He → 16O). Once carbon is present, it acts as a catalyst for the fusion of hydrogen to helium through a series of reactions involving carbon, nitrogen, and oxygen known as the CNO cycle (image on the right above), where the energy released maintains the fusion reaction going on. In very massive stars, this induces the fusion of heavier elements, ultimately forming all the chemical elements up to iron.

Curiously enough, the light chemical elements boron and beryllium are not generated by fusion but by a process called cosmic-ray spallation, which occurs when cosmic rays (high-energy protons) hit and break apart heavier elements such as carbon or nitrogen.

Heavy elements and the collapse of stars

Iron is a special element in the sense that it marks the transition between exothermic and endothermic fusion. Adding additional protons or neutrons to iron does not release energy; what’s more, for elements heavier than iron, fusion requires energy. Endothermic fusion reduces the core temperature, which in turn halts the fusion process. The star has now run out of fuel and, without fusion, there is nothing to oppose gravity. When the core reaches 1.4 solar masses (the so-called Chandrasekhar mass limit), the star can no longer support the outer layers and collapses under gravity. This event can be extremely fast; electrons and protons suddenly get squeezed together generating neutrons and neutrinos. This process can start fusion reactions in outer layers, which ultimately lead to the violent explosion of the star as a supernova.

It is at this point that the heaviest chemical elements are formed: during the explosion of supernovae.

In a supernova, the star releases very large amounts of energy and neutrons. This is key, as the existing nuclei can capture these neutrons producing heavier elements such as palladium or titanium. This is no longer fusion but a neutron capture process.

The heaviest elements are formed by one of two processes, defined by the timescale at which they occur: the rapid process (r-process) and the slow process (s-process).

Neutron capture events occur with a frequency of hundreds to thousands of years. In this scenario, a nucleus will evolve very slowly (imagine the time required to make cobalt from iron: 56Fe → 57Fe → 58Fe → 59Fe, finally β-decaying into 59Co). This process then continues building up nuclei up to 209Bi. Beyond this point, no nuclei are stable enough to undergo further neutron capture. That means that actinides cannot be synthesized by this pathway.

This process occurs during neutron star collisions, which you can imagine as being very intense in energy. In the r-process, neutron capture is very rapid, with the time between captures much shorter than the average β-decay times (seconds to days). The r-process is fast enough to break past the instability of nuclei beyond 209Bi. Stable actinides can then be produced directly from a neutron-rich precursor or from α-decay of heavier elements. 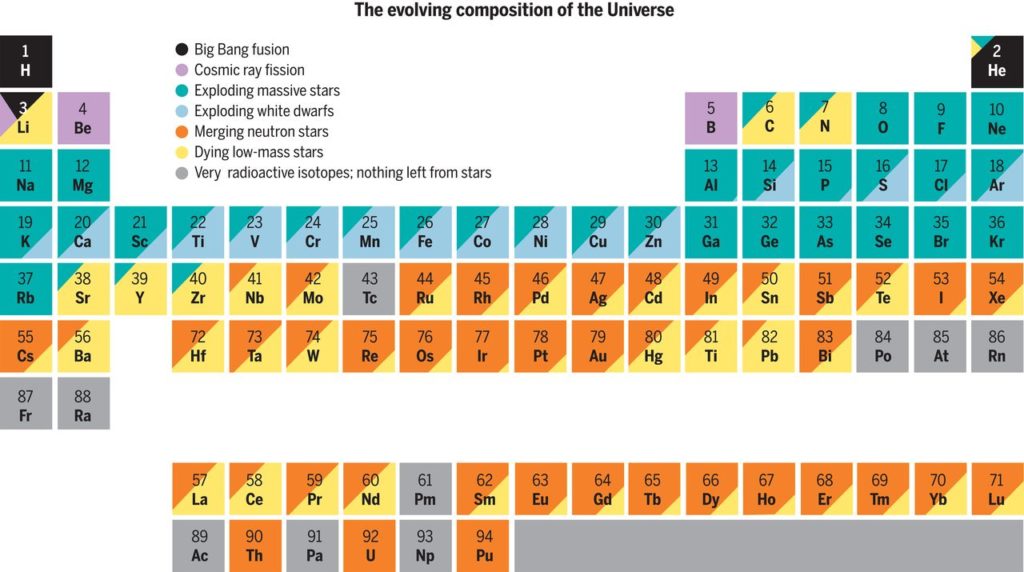 Upon explosion of the supernova, all these chemical elements are expelled out into space, where they can participate in the formation of new stars, planets (like ours!), or other astronomical objects. What is left of the core then becomes either a neutron star (for stars with masses 4­–8 times that of our Sun) or a black hole (for larger stars).

Only 2% of the hydrogen and helium generated after the Big Bang has been converted into other chemical elements. Although much is known about their mechanisms, both nucleogenesis and nucleosynthesis remain very interesting fields of research trying to answer the question of what we are made of.

“We are a way for the Cosmos to know itself.”