Going from N to C 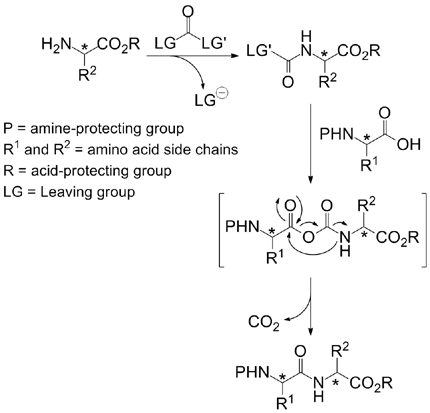 In fact the synthesis of peptides is not our thing. We do not have expertise in peptides, we do not carry out the synthesis of peptides using solid phase methods, nor we prepare peptides in solution (though we have a lot of experience refitting the solid phase synthesis of peptidomimetics into solution, convergent methods). But we do have a thing for carbonyldiimidazole (CDI). This humble reagent, which we think is undervalued both in med chem and in process development, offers some advantages, including price and user friendliness. We have used this reagent with wonderful results in the past, and this paper shows another striking use of the reagent.

Now, R. Marcia de Figueiredo et al (Institut Charles Gerhardt Montpellier, France) have shown that the CDI can be used to build peptides in the opposite way to the traditional, chemical way: that is activating the N-terminal and introducing an acid, instead activating the C-terminal and introducing an amine. This inverse activation method avoids the partial epimerisation of the activated component, which is a known problem with aminoacids as histidine and cysteine.

The protocol tolerates the usual protecting groups, Cbz, Boc and FMOC, making use of HOBt and CuBr2 in dichloromethane at room temperature. The authors compare in the paper the synthesis of a tetrapeptide, Cbz-Trp-Met-Val-Phe-OtBu, using a traditional PyBOP method and the new CDI protocol; while the yields are slightly lower (35% with PyBOP vs. 25% with CDI), a minor impurity attributed to epimerization which is present in the PyBOP product, is absent in the CDI product.

So stop purchasing HATU, PyBOP, EDCI and the rest and give the humble CDI an opportunity !