A number of chiral myths exist related to pharmaceutical products. Although nobody here denies the importance of enantioselective synthesis, sometimes there is no real need for such advanced methods. Moreover, sometimes the old-fashioned racemic resolution of a chiral compound is not only a good option, but an essential step in the development of a New Chemical Entity. We present here an example of a project facing up the challenge of racemic resolution of a promising candidate.

One of our clients approached us with a request to develop a racemic resolution method for a promising pre-clinical candidate. The main features of the compound are an aryl group introduced via organometallic coupling and a dimethylamino moiety introduced by means of aminative reduction of a ketone. The compound presents a chiral center in that position and initial assays showed that the S-enantiomer presented better activity than the R-isomer. Chirality was therefore a critical issue.

We were provided with the details of a straightforward route in two steps, considering that the needed building block for the coupling was also supplied. A method for the enantioselective synthesis of the compound was being developed, but to cover intellectual property claims and allow a faster supplying of bigger batches of enantiomerically pure compound for the upcoming trials, a classic racemic resolution procedure was required.

Each alternative has advantages and disadvantages. Alternative 1 would be faster because the route was already established and a chiral HPLC method for ee determination had been developed by our client. On the other hand, alternatives 2 and 3 would allow the introduction of an expensive building block in a latter stage, thus reducing costs, but synthetic steps should be tested and chiral HPLC methods should be developed.

We started exploring alternative 1. First, fast optimization of the coupling reaction was done while increasing the scale to grams. The subsequent aminative reduction worked finely to provide us with the final compound in enough quantities for our study. Applying the usual DoE principles, a short screening was designed using three solvents and five common and cheap resolution reagents under standard conditions. 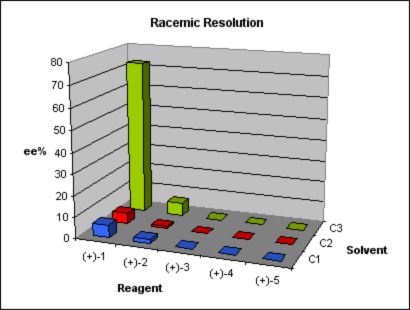 Of the fifteen parallel experiments, nine showed no crystals. In the remaining six experiments, crystals were isolated from the solution, and they were assayed using a chiral HPLC method. One result was promising, with 73% ee. Although such ee value was nothing to write home about, it offered a good starting point. Further crystallization of the enriched mixture allowed us to get the compound with an ee higher than 99%. A comparison between the isolated enantiomer and some samples obtained by preparative chiral HPLC showed us that we had separated the incorrect enantiomer. We reproduced the resolution with the enantiomer of the resolution agent, and the conditions, results, ee values, and identity of the obtained product were all checked successfully.

Although these results were excellent and they were obtained in a few weeks, we pursued the other two alternatives bearing in mind a reduction in costs and mass employed in the resolution.

Alternatives 2 and 3 involved a swapping of the synthetic steps, with the aminative reduction being placed first. The aminative reduction of the starting material with dimethylamine was troublesome. The reaction was not complete, needed harsh conditions and long reaction times. We turned them to microwave conditions in order to expedite the reaction and provide product enough for the screening. However, development of the chiral HPLC method was also troublesome and, when the samples of a screening study were assayed, the results were disappointing. Alternative 2 was obviously pushed to the back.

We were simultaneously working in alternative 3. This involved an aminative reduction with a protected amine to yield a product suitable for the resolution. The reductive amination was carried out without problems at multigram scale with excellent yield and purity to provide the desired compound. A chiral HPLC method was promptly developed and the protected amine was subjected to a screening study. Taking in account the results obtained in alternative 1, only one solvent was chosen and the pool of chiral reagents was expanded to eight.

Of the eight parallel experiments, only two showed no crystals. The remaining six crystals were isolated from the solution and analyzed by chiral HPLC, but only one result was promising, with 94% ee. Further crystallization of the enriched mixture allowed us to get the compound with an ee value higher than 99%. The pure enantiomeric product was subjected to a sequence of four reactions to give the final product in 25% yield and >99% ee.

However, since the sequence of reactions needed to reach the final compound from the resolved amine was too long, we introduced a small change in the protocol, which allowed us to reduce one step and get the final compound in 68% yield and >99% ee.

In conclusion, we applied DoE principles, parallelization techniques, and analytical skills to the problem and offered our client not one but two solutions to the problem, with a broader range of conditions for them to choose from. Moreover, the development of classic resolution methods cover important intellectual property issues when the product enters regulatory phases, blocking possible challenges from competitors.